I am kind of amazed at the people I know who believe in demons but not in God.

How does one live that way?

In intense fear, that’s how.

It makes sense they would live covered in the slimy feeling of watching your back every two seconds. That they would have no peace in their sleep or daily lives. That they would be in a constant state of emotional turmoil and depression. They are being oppressed openly, and the oppressor is rather enjoying themselves in keeping them caged and enslaved to bondage of blindness to the truth.

I know people within my own circle that are deathly afraid of demons. But, here’s the odd part.. they are atheists. These people see apparitions. They see them in people’s bodies seeping from the host’s eyes. The demons come into their rooms and stand by their beds and windows, beckoning them to awake and freak them out. 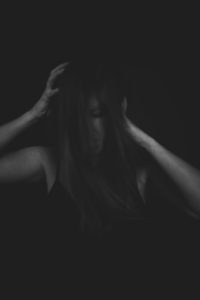 These people know with every fiber of their being that what they are seeing and looking at is real.

They are sure it wants to consume them.
And yet, the drive to live their own life free from the chains and rules of Christianity is so powerful they choose to just deal with the demonic harassment. They do their best to bury it and pretend it is only a figment of their imagination or chalk it up to bad dreams. They want nothing to do with being forced into a relationship with Christ because they don’t want anyone telling them what to do or how to live. The demonic have twisted them so severely that they know the dark side is real, they are confident of that, but they are also sure that there is no God. They believe there is no being that is good and right or more powerful. Let alone a God that loves them.
And that right there is just one of many of the grand gestures of the devil. The enemy is the master at creating a web of lies, confusion, and chaotic behavior. The darks ultimate goal is to breed fear and respect for itself and to cause us to believe that it is the final authority in all things.

How do these poor people believe in demons and choose not to have hope to defeat them? How can they live in that knowledge and experience the sickness of their emotional state and decide that this is as good as it gets?
These people are so hell-bent on hating Christ that they would rather live with their demons trailing them than face the truth of who the final authority really is. And they do. They hate Jesus Christ. I would beg the question, what’s to hate about Jesus Christ?

If we were just talking logically here, this mindset doesn’t make sense. Unless you were to see it as what it is. It’s a spirit of Rebellion. Most of these people do not know that they are indeed serving a god; it’s just not the most powerful one. They do not realize that they are in bondage and in chains of hate and unforgiveness. They think they are avoiding the “bondage” of Christ, and yet there they are walking around in rusty links enclosed about their bloodied ankles.

They are drudging and dragging so much ugly baggage they spend all their lives in a constant state of looking back and pulling it along. Discontentment and sleeplessness plague them all the days of their lives. And for what reason do they choose this path? Because there’s no rules? Yes, they have chosen this path because they think and thought they could dictate their own truth. They believed they had control and could make their destiny because if one doesn’t believe in the truth of the Almighty God, then he surely won’t and doesn’t exist.
But, the truth doesn’t depend on whether or not one believes the truth. It doesn’t disappear and leave because one doesn’t agree with it. It is absolute. You can never eradicate an Absolute no matter how much you don’t like it or don’t want it to be so.

The problem is with us. Not the truth.

We are the ones in denial. And that denial hurts us badly. Yet we choose denial of the truth over and over again because our own selfish flesh desires it. The demons offer a convincing substitute, and we humans will take that more often than not, over surrendering to the God of the Universe.

It’s the devil and his cronies prerogative. Offer them this? Distract them with this? Put fear into them by doing this? Do anything it takes to keep them from giving allegiance to Jehovah God.

If you’re one of these people that I have just written about here. Please ask yourself why you hate Jesus Christ? And if you come back and say “its because Christians are just a bunch of hypocrites, and I’ve never seen anything real from them.” Ask yourself why you would let some blokes that aren’t perfect, just like you, dictate your own belief whether or not something as big as God is true? Why do you need an excuse to not believe in God? Do you honestly think that the reality is dictated by what you want to believe? You already know that spirits exist. What is preventing you from wanting the power to defeat them?

Why one could be afflicted by demons in such a tangible way and not immediately look for a way to conquer it is beyond me. We look for solutions to everything else that ails us, yet when it comes to spiritual things, why is that off the table?

No, you’re in bondage. And you don’t know it. You’ve been sick for so long you can’t imagine what it feels like to be well. You’ve lost the drive to heal and get better. You’ve taken the poison so much that your system is immune to it. You’re tired of talking about it, of hearing about it and being around those holy rollers.

Yet, that nagging truth just won’t leave you alone altogether. No matter how much you try and bury it in a deep grave, the packed dirt over it keeps producing hands protruding into the air. And it’s unnerving to you. Why won’t these annoying Christianese just leave you alone? You’ve made your choice. God doesn’t exist, and that’s final. But it keeps haunting you, doesn’t it? Ya, that’s because it’s reality. You were made to worship God. Deep down you know it. The more you suppress what you were born to do the harder hearted you become. The longer you live in denial the harder it will be to acknowledge the truth. You weren’t made to worship any other god other than the God of Abraham.

I pray that the dark things that are blinding your ears and covering your eyes would be removed in the name of Jesus. I pray that your souls would be lifted from the miry clay and redeemed. I pray the spirit of Jezebel be removed and bound from you so that you might be able to see the truth and not just see it but want to live it. I pray that you would come to the point of surrender and change teams before the game is over.
And lastly, that you would experience the warmth of God’s love who is beckoning you. Ya, come into the light? That darkness is only bringing you pain, regret, bitterness and rage. You’re in bondage. The only way out is through Jesus Christ. Choose to serve another master. Your already serving a master. You’re either in one camp or another. There’s no creating your own camp. Choose the better, bigger and Holy master. With one stroke of his powerful name you can command those demons to go.

Don’t you want that? Don’t choose to live in fear anymore.

This site uses Akismet to reduce spam. Learn how your comment data is processed.